Last Friday a musical event was being hosted by the office of tourism – planter punch cocktails were being offered at the Marina in Pointe du Bout, and there was live music on the menu. The singer was big burly chap who had a sort of Barry White type voice, and sang a few jazzy numbers before unleashing the dance hits to get people on the floor. I got talking with Véro and Nat, two young French girls on a mission to have fun in Martinique.

We spent the following days of their one week holiday together by circling the island and discovering various Martiniquian bits and bobs. It also turns out that Nat had a cousin she hadn’t seen in 10 years living on the island, who we met up with several times. Florina lives in Ducos with her boyfriend Pascal, and they both showed us around many cool spots. We all got along very well, and did a lot of hanging out on beaches, visiting places, eating and drinking together these past few days. 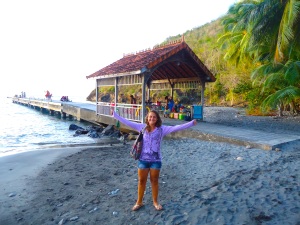 The two girls and I rented a nifty little car on Monday and we drove around a good part of the Eastern coast as well as the Southern center of the island. We went to the majestic beach of Les Salines (the biggest of the Caribbean I hear), we walked through St Anne (a splendid area giving on to turquoise waters), we visited the Habitation Clément, a rum distillery in François which was exquisite to say the least (the rum tasting was particularly fun!), we visited part of the Tartane peninsula where there were traditional market stands scattered around the centre of the village…

We had also visited the day before St Pierre, on the North Eastern coast of the island, a charming little village from which we watched the sun set on a pontoon. St Pierre is full of very interesting history, and we had walked around the ruins of the old theater and prison cells. It is a charming place to visit because of its history and also its colorful houses, bistros and kayaks which lounge around in the yellow sand… In almost each place I have visited, there is always an attractive religious monument such as a little church, an abbey, a chapel, which give the villages an authentic touch especially when you are there to hear the bells ring.

My favorite place of all: Ti-Sable, a beautiful chic bar in Grand Anse on the beach. It had such a great vibe and atmosphere to it, and was beautifully designed – curtains, lanterns, buddhas, an attractive stage, colorful spot lights, a champagne bar, deck chairs, cushions, … and I enjoyed all this bare foot in the sand. We were there on Sunday evening, and a local band called Kaf-Konce entertained us with many musical covers which started mellow and ended up very pop and trendy. Ti-Sable essentially turned into a night club later on, and the beach bar was packed with all sorts of young hipsters (locals and tourists) waving their hands in the air and dancing away underneath the stars. What a beautiful night.

Another superb moment was meeting the Martinique female rugby team on the beach of Anse Dufour! They were having a lively jovial barbecue on the beach, and were often making passes and tackling each other for fun whilst the fish was grilling away. We were lying on our beach towels not so far away from them, and thus got chatting with them after watching them impress us with their rugby tackling skills. They were such happy girls, always laughing and joking around, and even told me that they were looking for extras to fill their rugby team if I was interested… Who knows, maybe one day I’ll return to Martinique and play rugby for a living! 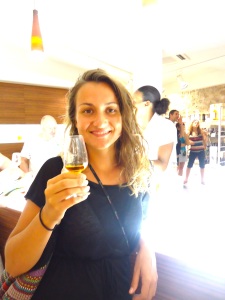 On Monday I fly to Los Angeles very early in the morning – I am taking 3 flights, one to Santo Domingo, one to Miami and then one to Los Angeles. I will stay in Pasadena for 10 days or so, and then return home to the Pays de Gex, near Geneva where I was born. Yes, it will be difficult adapting to the cold again after six months of hot humid temperatures, and yes, it will be tough returning to reality, routines, an office job. Waking up from a such a wonderful dream will certainly be no picnic… But dreams such as these would not nearly be as good, tasty and intriguing if they did not have endings. What counts is bringing them to life, even if it is just for a brief moment.